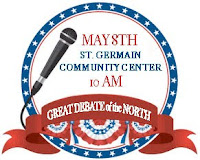 WISCONSIN EYE was on-site to video our entire debate and posted the event here:

Fire numbers in St. Germain have been changed within last year so many GPS may not recognize this location:  St. Germain Community Center, 545 State Highway 155, St. Germain, WI  54558

We created a Google Map to the Community Center for the Event directly here for reference.

Mr. Wall has canceled his appearance at the Great Debate so the release and poster linked here are considered most recent as of May 6, 2010.  Please note timing is subject to change but we'll do our best to stay on schedule.  Come early if you plan to attend only a specific debate and not the whole time.

FOR IMMEDIATE RELEASE
Contact: Republican Women of the North
Diane Misina 715-891-0048
Kim Simac 715-479-8784
Email: rwotnorth@gmail.com
May 4, Revision:  T Wall just contacted us and now will not be participating in the debate.  All other candidates are scheduled to attend as originally planned.
May 1, Revision:  U.S. Senate candidates Terrence Wall and Dave Westlake will both participate in the debate.  Newly declared candidate, Dick Leinenkugel, will not be participating.
GREAT DEBATE OF THE NORTH
TO BE HELD IN ST. GERMAIN
Republican Candidates to Debate May 8
ST GERMAIN Wis - Republican candidates in three key primary races will hold a first-of-its-kind debate in the Northwoods on Saturday May 8 at the St. Germain Community Center on Hwy 155, beginning at 10:00 am. The debate, sponsored by the Republican Women of the North, is free and open to the public.
The Great Debate of the North will provide an opportunity for residents of Northern Wisconsin to hear directly from these candidates about their positions on a variety of challenges facing our state and nation.
Republican candidates seeking their party’s nomination in races for the U.S. Senate, U.S. House of Representatives, and Lieutenant Governor will debate the issues and discuss their political philosophies.
The Republican Women of the North will welcome attendees and candidates at 10:00 am. They will then award a scholarship to the winning student who best described “What Being a Woman in America Means” in an essay contest recently held.
At 10:15 am, Dave Westlake, candidate for U.S. Senate, will be introduced, given time to speak and our moderator panel will ask questions of him.
Beginning at 11:00 am, candidates for Lieutenant Governor will face off. These candidates will include Ben Collins, Brett Davis, Rebecca Kleefisch and Dave Ross.
Food and refreshments will be available at 12:00, during which time Secretary of State candidate David King and Vilas County Sheriff candidate James Maillette will address the audience.
At approximately 12:30-12:45pm, all five Republican candidates in Wisconsin’s 8th congressional district race for the U.S. House of Representatives will debate. Candidates in this race include Terri McCormick, Reid Ribble, Roger Roth, Marc Savard, and Marc Trager.
Republican Women of the North recognize the instrumental contributions of time and talent of Northwoods Patriots members, Vilas County Republican Party members, Jerry Burkett for his sound system, and to the Town of St. Germain for the Community Center venue.
###
For further information about the debate and to schedule interviews with any of the candidates or event organizers, please contact Diane Misina at 715-891-0048 or Kim Simac at 715-479-8784.
Map to St. Germain Community Center
545 Highway 155, St. Germain, WI
View Great Debate Day of the North in a larger map

In and Around Vilas County, Wisconsin
Email * Meeting Info