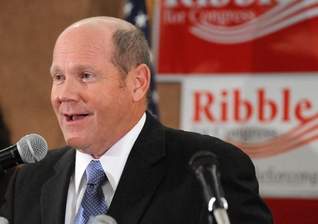 Ribble's Victory Speech - click here
﻿
Republican newcomer Reid Ribble faced a roaring crowd Tuesday night as the results of the midterm elections became clear — on a wave of anger with incumbents and the sluggish economy, the GOP took control of Congress and statewide offices in Wisconsin and across the country.

Like many winners in the 2010 midterm election, Ribble entered Wisconsin’s 8th Congressional race as someone new to politics and elections without any previous experience in elected office. The GOP backed a wave of unknown first-timers to help take the U.S. House, close the gap in the U.S. Senate and add more governorships to their ranks.

“I think there’s a message being sent to President (Barack) Obama, quite frankly, that (voters) felt the government overreached and now we want you not to reach so far,” said Ribble, who moved from Kaukauna to the town of Lawrence to run in the 8th Congressional District against incumbent Democrat Steve Kagen.

After voting Democrat in every presidential election since 1988, Wisconsin looked more red than blue on Tuesday. Voters ushered in a new group of Republicans into the governor’s mansion with the election of Milwaukee County Executive Scott Walker. The party also picked up seats in the U.S. Senate and two Congressional seats.

Johnson, owner of a manufacturing company in Oshkosh, easily unseated Sen. Russ Feingold, D-Middleton, who will walk away from Washington after 18 years in the upper chamber with recent polls showing he’s still popular in Wisconsin. As of press time, Johnson had 54 percent of the statewide vote with 57 percent of precincts counted.

While Walker had considerable more political experience than Ribble and Johnson, he effectively tapped into the same “less taxes, smaller government” mantra that Republicans nationwide ran on to take the governor’s office being vacated by Democrat Jim Doyle.

Walker easily defeated Barrett with 52 percent of the vote and 69 percent of precincts reported thanks to a party that rallied following a contested primary. After Walker defeated Mark Neumann the two worked together to help bridge together areas where Neumann out performed Walker, including much of Northeast Wisconsin. Walker garnered 56 percent of the vote in Brown County on Tuesday.

But it wasn’t a clean sweep for the GOP. Though Republican Sean Duffy won the 7th Congressional seat long held by Democrat Dave Obey over Julie Lassa, Democrat Ron Kind staved off serious opposition from Republican Dan Kapanke to hold the 3rd District.

Still, the victory was decisive, and Republicans that threw darts from the outside for the past two years will now have significant leveraging power in Congress and state capitols nationwide.

“I do know this: this is going to be a pretty healthy mandate. If the house flips 45 or 50 seats, there’s a message that’s being sent to the other side, and that is we want something different,” Ribble said. “We want a government that will reach across the aisle. This type of rhetoric where the Republicans can sit in the back and all that kind of stuff, that stuff’s got to end.”


Link to article and additional information available at:  http://www.greenbaypressgazette.com/article/20101103/GPG0101/311030137/Republican-Ribble-unseats-Kagen-in-8th-Congressional-District-race


Republican Women of the North, Northern WI, rwotnorth@gmail.com
at 9:13 AM

In and Around Vilas County, Wisconsin
Email * Meeting Info